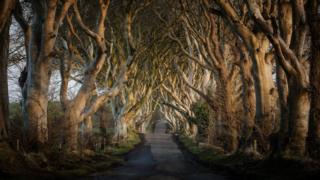 Traffic is to be banned from part of a County Antrim road – made famous by the TV fantasy drama Game of Thrones – to protect trees known as the Dark Hedges.

The tunnel of beech trees on the Bregagh Road, near Armoy, has become a major international tourist attraction.

The scene was used by the Game of Thrones crew to represent "the Kingsroad" in the HBO drama series.

Stormont's Department for Infrastructure is introducing a ban on cars using the road from 30 October.

The order will also prohibit buses and coaches from using the designated stretch of the Bregagh Road.

Some vehicles – including agricultural and emergency vehicles – will be exempt from the ban "in certain circumstances".

The Dark Hedges were planted more than 200 years ago by the Stuart family, who created a tree-lined avenue along the entrance to their Gracehill House mansion.

About 150 were planted by James Stuart, but time has taken its toll over the centuries and now fewer than two thirds remain standing.

In January 2016, during Storm Gertrude, high winds ripped up two trees, causing them to collapse.

Later that year, a large, rotten branch broke off one of the trees and fell across the road.

The Dark Hedges became a huge draw for tourists and TV fans after they appeared, albeit very briefly, in the closing scene of one episode of Game of Thrones.

Arya Stark, one of the show's main characters, was filmed travelling on a cart along the road, disguised as a boy.

Conservationists have expressed alarm about the increasing traffic levels in the area and the possible damage to the trees' roots.

During the Easter holidays this year, pictures of traffic jams were shared on social media, some criticising the number of vehicles lining the road..

The cycling blog NI Greenways described the Dark Hedges as a "national treasure" and claimed it was being slowly killed.

The Department for Infrastructure published the banning order on 5 October.

It had proposed the ban last year, after "discussions with Causeway Coast and Glens Borough Council and other interested parties".

The department said new traffic signs, advising the public of the ban, would be erected in the area "in due course".