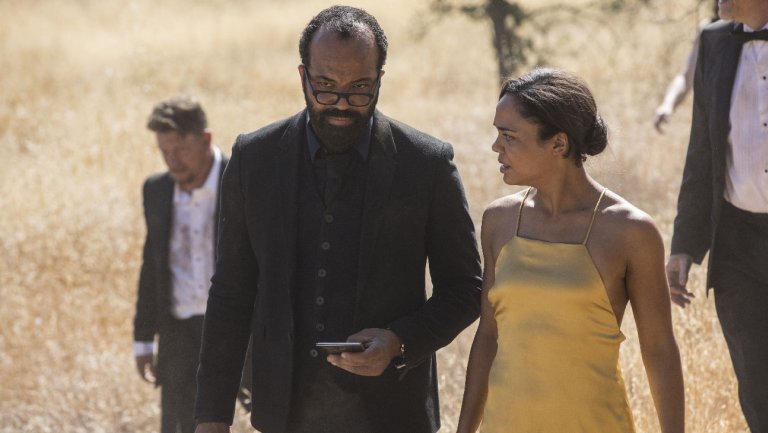 Jonathan Nolan and Lisa Joy tell THR about how one host's "lost in time" journey will impact the episodes ahead.

[This story contains spoilers for the season two premiere of HBO's Westworld, "Journey Into Night."]

In the season two premiere of HBO's Westworld, viewers were again tossed down a rabbit hole filled with theories, where one opened door leads to many more closed ones. Case in point: the story of Bernard, played by Jeffrey Wright, which plays out across multiple moments in time. Wright appears in at least three different, distinct periods of time throughout the episode, and may even be appearing as two different characters: Bernard, the scientist who learned the truth about his secret host origins near the end of season one; and Arnold, the park's co-founder upon whom Bernard is based.

The season begins with Wright, likely as Arnold but potentially as Bernard, sitting across from Dolores (Evan Rachel Wood) and embarking upon a dazed and confused conversation about dreams. When the dreamlike scene ends, Bernard wakes up on a shore with an apparent case of amnesia, surrounded by Quality Assurance soldiers; here, we learn that two weeks have passed since the park went dark, right around the time Dolores assassinated Robert Ford (Anthony Hopkins). While traveling with the QA team, Bernard experiences blackouts and flashes of memory, eventually thrusting the viewer into the story of what happened to Bernard in the immediate aftermath of Ford's death. The premiere finally returns to Bernard "two weeks later," with QA, discovering a veritable ocean filled with dead hosts.

"I killed them," he tells new character Karl Strand (Gustaf Skarsgård) at the end of the episode, his face contorted and troubled. "All of them."

But did he really? Has Bernard experienced some sort of memory glitch that's wiping his recollection of killing the park's hosts at some point in the past two weeks — or should fans approach Bernard's story with extreme caution? Speaking with The Hollywood Reporter at the show's Tribeca Film Festival premiere, creators Jonathan Nolan and Lisa Joy remained coy about the exact specifics surrounding the premiere's final scene, instead laying out their vision for how Bernard's experience with time will impact the season ahead.

"In the first season, we were playing cards down with the way that the hosts' memory works," said Nolan. "Which is to say, through the first season, we are not aware that Dolores is actually remembering things and mistaking them for reality. One of the things we were excited for in the second season was now playing cards up with the idea that hosts mistake their realities for their memories, get lost in time, bounce back and forth."

For those who require a refresher: Dolores' first season was spent tripping through different memories, retracing the path she once traveled with William (Jimmi Simpson), only to later realize she was living through an old experience. The storyline culminated with the reveal that William was a younger version of the Man in Black (Ed Harris), a twist many fans predicted in advance. Did the way in which viewers interacted with and guessed the Man in Black reveal influence Nolan and Joy's decision to play "cards up" with Bernard's interaction with reality, memory and time?

"It was kind of embedded in the DNA of the show," said Joy. "Basically, when you're dealing with hosts who don't understand when they are, especially when you're trying to build and bridge empathy with them, it makes sense to constrain yourself to that point of view and experience the world as they start to learn more about it, as an audience member. There's a sort of mimicry that's happening there in a structural sense. I think that the ways in which we manipulate time … will be a little more above ground this season, because they're aware now that they're a little lost in time, but they're still lost."

"Bernard's awareness of what happened and the fact that he doesn't seem to remember a lot of what happened [after Ford's death] is something that we'd like to play within this season," added Nolan. "He's a bit unreliable. Jeffrey's a lovely person, but Bernard is a bit of an unreliable narrator in the second season."

What are your predictions for how the Bernard storyline will play out? Were you shocked at the ending of the premiere? Sound off in the comments below, and keep following THR.com/Westworld for more coverage.