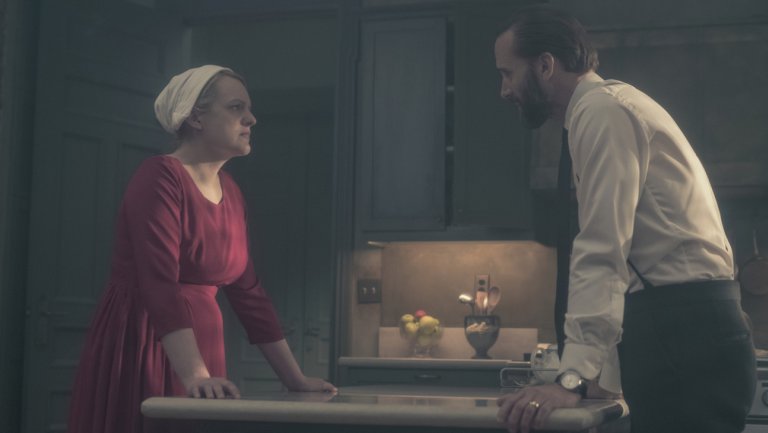 "I hope for people, it's infuriating in a good way," Bruce Miller tells THR about the latest turn in the Emmy-nominated drama.

[This story contains spoilers for the season two finale of Hulu's The Handmaid's Tale, "The Word."]

For anyone left feeling frustrated over the final scene of The Handmaid's Tale season two finale, showrunner and creator Bruce Miller welcomes you to the club.

The season finale, called "The Word," ends with Offred (Elisabeth Moss) making the shocking decision to stay behind in Gilead in the face of her best chance at escape yet. What's more, she chooses to entrust her infant daughter Holly (renamed "Nicole," as a tribute to Yvonne Strahovski's Serena Joy) to Emily (Alexis Bledel), while remaining in Gilead in order to find her older daughter, Hannah (Jordana Blake).

The twist paves the way for a third season in which fans can expect a more rebellious Offred than ever before. "Blessed be the fight," is how Miller describes the tone of season three. But many critics were displeased with the finale and Offred's decision in particular, with THR's Dan Fienberg describing the episode as "an ungainly mixture of fan service and fan alienation."

For his part, Miller tells THR that he has heard the reactions loud and clear, and with one exception ("Vanity Fair said that the finale was ridiculous; that one hurt my feelings!"), he not only understands the frustrations, but shares them.

"I like the fact that people are frustrated," he says, responding to the critical reaction to the finale. "I was frustrated. You want her to make a different decision. I love the fact that June does things that we disagree with, that she's driven by her emotions and her brain and her strategy and all of those things, but in different measure than we are. So, I'm glad that people are annoyed by what she did, and have questions about what she did, and I think the reviews help me kind of see how people feel about it because I know how I feel about the moment, but you can't really tell how people are going to react until you get there."
"The thing that was encouraging," Miller continues, "is it seems like the conversations that the critics were having and people were having on social media were all the conversations we had in the writing room. We went back and forth on all these things, too. They're preaching to the choir."

Miller, speaking with THR moments after The Handmaid's Tale officially received 20 nominations for the 2018 Emmy Awards ("Being recognized by your peers is a special feeling that I don't think I appreciated until it happened," he says), explains the reasons for Offred's choice as having roots in the full season's arc.

"She spent the whole season regretting that she had to carry one child out and leave one child behind, and then as soon as she got to the point where that child in her belly was not in her belly anymore, and she could actually hand it off to another human, there's an opportunity to go back and save the first one," says Miller. "Until that baby's born, you can't separate yourself. If the baby's getting out, so are you. But as soon as that was not true, she realized that the thing that was pulling her all season towards Hannah, was that she would not be able to live with herself if she left."
"So, those big decisions and the big things that happen in the finale, it's always great when people are interested and frustrated and screaming at their TV and all those kind of things," he continues. "It's not a show that you can say is enjoyable all the time. A lot of times, it's a tough, tough world, and she has to make tough decisions, and it's infuriating. But I hope [for] people, it's infuriating in a good way, an entertaining way, not in a 'what the hell did Bruce Miller do to me' way."

Miller acknowledges that what many Handmaid's viewers "really want is to have [Offred] just be happy and sitting on a porch with her husband and child, and it's more complicated than that." When countered with the notion that many viewers would be perfectly happy watching a 13-episode season in which the Emmy-nominated Elisabeth Moss does little more than happily sit on a porch with her family, Miller laughs and concedes the point: "Totally. That's the feeling, that in some ways, the reward is so delicious when you get it. [When we get there], it's kind of like you've earned boredom. You've earned a little bit of peace. I definitely think you're feeling that when you watch the show. It's just like, 'God, can she just get a fucking break?' And when she does, it's going to be incredibly wonderful."

"But here," he continues, "I think she, for the first time, is making her own decision about what to do. Most of the rest of the time, she's in a lot of ways been ferried around, even at the beginning of the season. She's kind of ferried around as a handmaid doll that's moving from place to place. She doesn't have so much agency, and here, she makes her first big choice about where to go."

Sound off with your reaction to the season finale in the comments below, and keep checking THR.com/HandmaidsTale for more coverage.

IcetruckJuly 12, 2018
Like story:
tweet
10 Fabulous Quotes About Love That Will Make You Feel Alive Again
How to Keep Computer Screens from Destroying Your Eyes