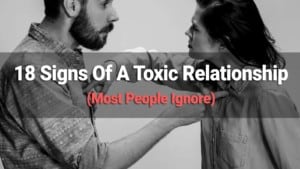 We’ve all had at least one toxic person in our professional and private lives over the years. They may be relatives, friends, or coworkers who subtly weave you into their personal agenda.

It may take months or even years before you realize what this individual is doing behind the scenes. Not all manipulative people are inherently evil. Some are conditioned at an early age to believe that the world owes them something, and people are in their lives for their advantage.

On the other hand, just because someone is a good person doesn’t mean your chemistry isn’t toxic. Wouldn’t it be nice if you had an invisible truth detector that could reveal everyone who lies and only wants to use you?

Just think of all the frustration and heartache it would have saved you over the years. Unfortunately, there’s no such machine, and you must rely on well-honed instinct and intuition to detect selfish agendas.

The motives behind some manipulative people may be evident to you, and you can easily break ties. Others can craftily wrap you into a web of guilt and a false sense of responsibility to them, and they influence your thinking. They eventually snare you into a burdensome relationship that does nothing but benefit themselves.

Red Flags Someone Has a Hidden Agenda

How can you discern a toxic person before you become an unwilling participant in his sordid agenda? You can’t always avoid being burned in a personal or professional relationship, but some red flags are detectible. Here are 12 actions a person with a hidden agenda displays before revealing themselves.

Your powers of intuition are just as vital as your reasoning and reaction skills. While we all have it, some learn to improve their intuitive gifts. Sorting out manipulative people requires you to trust your gut feelings.

Have you ever been around somebody and just felt that something was off? He may seem perfectly pleasant and accommodating, but you still don’t resonate with his personality. Be wise and watch for other warning signs that this person may not be as he seems.

2. You Catch Her in Lies

Nobody is above telling a little white lie to protect themselves or someone else, and we learn the deceptive art at an early age. However, consistent lying becomes a character flaw that can be detrimental to personal or professional relationships. There is no bond without trust and honesty.

A toxic person will often tell lies about the most senseless subjects. Does she create big whoppers about his past, career, or his abilities? If she is lying is so apparent about common issues, what other deceptions is she feeding you?

The perfect way for you to know that a person is lying to you is eye contact and body language. Most people can’t maintain good eye contact and seem awkward when they are deceptive. However, beware of pathological liars who show no signs and are so believable, they often deceive themselves.

3. She Talks About Her Favorite Subject: Herself

What can be more frustrating than to be stuck in a conversation with an egomaniac? Healthy dialogue is like a game of tennis, where the discussion volleys smoothly from one side to the other. If a person in your life continually monopolizes conversations, take note of it.

Narcissistic people secretly battle low self-esteem and fear, so they are compelled to stay in the limelight and belittle any perceived competition. You know the type, no matter what you know or have done, she can one-up you. If all she can talk about it herself, be assured that her agenda is just as selfish.

How many times have you worked with a colleague on a project and saw that he wanted to ride your coat tails to success? Maybe you met a guy who seemed really into you until he hinted that you introduce him to your best friend? These manipulative people have a mission, and you are only a tool for their accomplishments.

You can often tell these self-interested ones within one or two conversations. Your new best friend may be working out fine until she gives you a stack of sale catalogs for products she represents. Fortunately, agendas like these are self-evident, and you can cut ties early before they become a problem.

5. You Observe Signs of Hypocrisy

When a person has a deep conviction about something, it remains true regardless of the company and situation. For example, how would you feel about a guy who says he values honesty, yet he didn’t pay for the desserts the server accidentally forgot on the bill on your last date.

It has been said that a person shows his real character when he thinks no one is watching or listening, if they don’t, then they are a hypocrite. Does the individual in your personal or professional relationship preach one set of values and practice another? If so, his benefits may be skewed, and his plan may not be one you appreciate.

6. He Is Obsessive About a Subject

Often, the thoughts and desires we keep hidden from our partners will manifest itself in other areas. However, some people are so preoccupied with personal gain that they discuss it obsessively. You may not need to do much research to get the hint.

What if you are in a romantic relationship, and you’ve created goals as a couple? Maybe you agreed that you would keep working after you got married. Wouldn’t you feel a little concerned if he kept suggesting that you will quit your job and stay at home soon?

Coworkers can also be visible when they want to use others to vie for higher positions and salaries. Listen to his conversations in the office and the break room. If his discussions are one-sided and manipulative, don’t get caught in his wave of self-promotion.

7. He Has a History of Being a Manipulator

Of course, we’ve all done things we weren’t proud of in the past. Some people learn from their mistakes, while others turn them into a lifetime of bad habits. As they say, love may be blind, but hindsight is twenty-twenty.

It pays you to notice patterns in your love interest’s life. Has he been married more times than a movie star? Have his past relationships been broken because he cheated, yet he swears he will be faithful to you? These are all classic signs that you need to watch as their manipulative tendencies could have caused this pattern.

8. She’s Letting Anxiety Get the Best of Her

Women tend to let their anxiety show more than men, though that isn’t always the case. If you notice that she is showing signs of anxiety, such as dizziness, sweating, unable to sit still, and panicking, then it could be that she is toying with revealing a hidden agenda. She is, no doubt, nervous about how people will react to her plot being brought to the forefront.

9. You’ve Noticed His Body Language is Off

You can tell a lot from someone’s body language. If a hidden ploy is coming to light, then the body language might be forth-telling. If they are excited about the plan being exposed for their gain, then they may be giddy with excitement.

However, if they are nervous about their plot coming out, then they may be angry, irritable, grouchy, and quiet. Watch his body language because it can tell you more about the manipulator than anything that comes out of his mouth.

10. He Is Being Super Secretive

There’s an old saying that states that anything done in secret will always come out. If he has something that he is hiding, there is a reason for his secretive nature. It’s often his toxic intentions that are not ready to be exposed.

If you notice that he is secretive about everything in his life, or he takes his phone in the other room to avoid you hearing the conversation, then somethings up.

Oversized reactions are common when someone has a hidden agenda. Some may say these reactions are caused by their anxiety, kicking up as the body is going into that fight or flight response.

However, others may say that the real reason your friend is on edge is that they can become emotional at anything that derails their plans. It can also be that their apparent use of emotions serves as an attempt to shut down discussion in resistance to their goal.

It’s often the case that many people will start seeing the holes in a story long before the truth about a plot comes out. If you add the components together and find inconsistencies, it could be forth-telling about the big reveal.

You don’t want to accuse your friend because of a couple of discrepancies, but if you find that things don’t make sense, trust your gut feeling.

Final Thoughts on Detecting a Person with a Secret Agenda

It’s often the case that many people already know that something is off before anything is revealed in their toxic relationship. Always trust your gut instincts as they are there to protect you.

If you are genuinely caught off guard and had no clue what was happening, then you can use these red flags to keep you from getting into a situation like that again.

Find out Which Zodiac Matches Make the Best Couples?