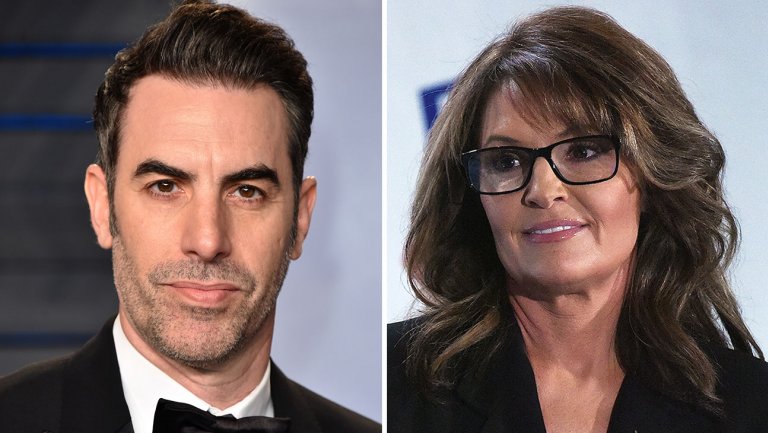 Cohen's Dr. Billy Wayne Ruddick Jr. is demanding an apology from the former Republican vice presidential candidate, who claims she was duped into a "sick" interview for the comedian's new series, 'Who Is America?'

Dr. Billy Wayne Ruddick Jr. — a Sacha Baron Cohen character possibly featured in his upcoming Showtime series, Who Is America? — took to Twitter on Thursday to fire back at Sarah Palin for her recent Facebook remarks.

Days after Palin revealed in a lengthy post that she unknowingly participated in a "sick" interview with Cohen for his new show, the comedian's right-leaning MAGA enthusiast persona, Ruddick — the founder of Truthbrary.org, which features articles titled "Hollywood Satanic Elite," "Crooked Hillary" and "Obama Is a Kenyan," among others — responded in a heated (and facetious) social media statement.

"I am Dr. Billy Wayne Ruddick, founder/ceo/accountant of Truthbrary.org and it was I that interviewed you," he began, clearing up Palin's claim that Cohen disguised himself as a wounded U.S. war veteran. "I did NOT say I was a War Vet. I was in the service — not military, but United Parcel, and I only fought for my country once."

Cohen's character continued: "When I shot a Mexican who came onto my property. (Coincidentally, just like our Great President, I was sadly prevented from joining the regular army on account of bone spurs bein discovered in my testies.)

Ruddick, who joined Twitter in May, then took aim at Palin for engaging in rhetoric about the authenticity of President Obama's birth certificate and her widely mocked assertion about Russia's proximity to her home state of Alaska.

"I have always admired you for TELLING THE TRUTH about Obama's birth certificate and the location of Russia," he wrote. "But ma'am I do believe you have been hit by a bullshit grenade and are now bleedin' FAKE NEWS."

The note concludes with a few more digs at Palin and a demand for an apology. "You used to hunt the most dangerous animals in the country, like wolves and people on welfare," Ruddick added. "So why hunt a fine citizen journalist like myself? I DEMAND AN APOLOGY."

He also included the following hashtags: #MAGA, #buildthewall and #boycottsachacohen.

On Tuesday, Palin wrote on Facebook that she was tricked into sitting down with Cohen. One day later, radio host and one-term U.S. Congressman Joe Walsh also claimed that he fell victim to Cohen's prank show.

"Out of respect for what I was led to believe would be a thoughtful discussion with someone who had served in uniform, I sat through a long 'interview' full of Hollywoodism’s disrespect and sarcasm — but finally had enough and literally, physically removed my mic and walked out, much to Cohen’s chagrin," Palin wrote in part. "The disrespect of our U.S. military and middle-class Americans via Cohen’s foreign commentaries under the guise of interview questions was perverse."

She also claimed that "the Cohen/CBS/Showtime production team purposefully dropped my daughter and me off at the wrong Washington, DC airport after the fake interview, knowing we’d miss all flights back home to Alaska." Palin added, "I wrote this off as yet another example of the sick nature that is media-slash-entertainment today."

Showtime had no comment when contacted by The Hollywood Reporter.

Who Is America? premieres Sunday at 10 p.m. ET/PT on Showtime.